The Brief is a weekly newsletter by Strength Matters on a Friday, that shares a potential life-changing topic or question. The goal: to help you become a more rounded everyday athlete.

So, after all these years, why are we just as in love with Bond as we were decades ago? I think one simple phrase explains it all: He’s badass!

No Time to Die has just been released here in the UK, and I’ll be honest. I’m a huge fan. I’ve already seen it twice!

I’ve always been a Bond fan, ever since I was little. Maybe it was secretly why I joined the Police.

I used to watch all the Sean Connery movies with my grandpa every Sunday afternoon when they came on terrestrial TV and, I guarantee you I was there on all the opening nights at the cinema for the Pierce Brosnan era in the 90’s.

And who can forget the computer game GoldenEye! Not me for sure. I lost years of my life playing on my Nintendo 64 with that game!

Like all Bond actors, sadly they come, and they go. No Time to Die says goodbye to the Daniel Craig era. Don’t worry, no spoilers here!

I think every actor who played Bond has brought something unique to the role. They were the right Bond for that time and era.

Now, I know for the avid James Bond geek you can have hours of endless debate about WHO the best James Bond is/was. However, for me, it’s Daniel Craig.

He’s made Bond a more realistic character. He feels like a real person, someone we can relate to, and absolutely someone who looks like they could kill you.

I don’t know about you, but I reckon I could take Roger Moore in a fight, maybe not Connery, but there is no way I would be taking on the Daniel Craig’s Bond anytime soon.

And that’s coming from a former Krav Maga instructor FYI! He is BUILT and ATHLETIC AF.

That’s kind of a perfect Segway into today’s topic: How to Train Like Daniel Craig and James Bond.

Now, of course, there’s one scene, dating back to 2006 in when Daniel Craig emerged dripping from the ocean in Casino Royale (2006), the universe of James Bond was as shaken as 007’s preferred martini. 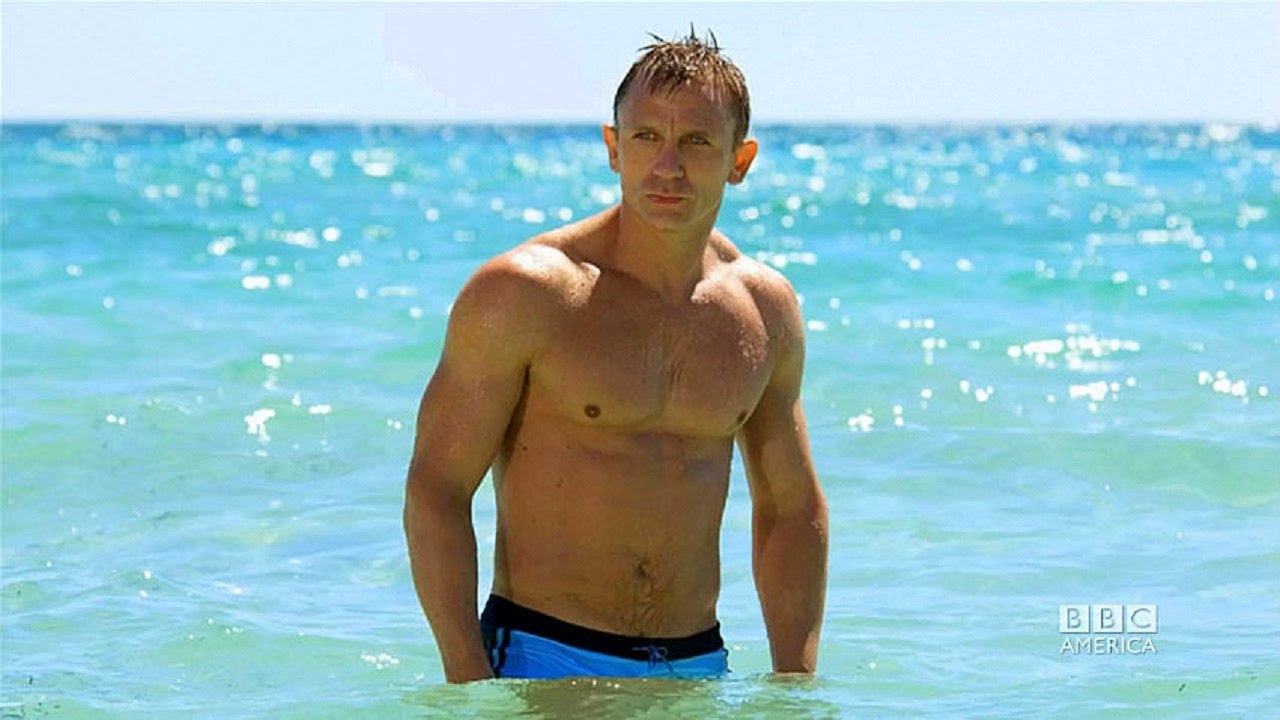 With his tiny blue swim trunks and a dramatically toned physique, the sea-drenched Craig instantly transformed the decades-old super-spy into a new kind of sex symbol: A rugged, body-confident hero as gawkable as any Bond girl.

Though Craig swears the iconic beach scene happened by accident, it hardly matters. The moment not only impacted swimwear trends, but it defined Craig’s Bond for the decades to come.

It’s that physique that every guy over 40 aspires to have.

So, let’s talk more about that, and be realistic on how you achieve that.

He’s done a fantastic job, and to be honest, if you want to look like Craig, ignoring the genetics part, you may want to speak with Simon direct as he’s the one who helped achieve it.

But let’s hypothesize here. Let’s start with how Craig looks. He is:

Most guys over thirty are not.

So, let’s start with the basics here, before we get into any fancy training plan. The very basics that most people like to skip on.

James Bond nourishes himself. To achieve sub 10% body fat, which I’m guessing Craig is during this shirt off scene, and all other scenes he has done, he nourishes himself to obtain all the vitamins and minerals the body needs to not only exuberate good health but to help him get his body fat percentage that low and pack on muscle.

Before I start World War III here and, may need to employ the services of Bond to get me out of this mess, every diet works. It’s a case of picking one that’s right for you and sticking to the damn thing.

Calories in, Calories out is the magic equation, never forget that. How you achieve that, depends; it could be calorie counting or it could be more mindful/eating using hand portion control.

Either way, you’ve got to figure out the right method, and how many calories you need to do this.

So, taking the average 40-year-old guy who likes a few pints of beer after work, and the odd takeaway, maybe all you need to do is switch those beers after work for a few martinis and laying off on the takeaways and processed food for a while. Instead, focus on more wholesome real foods.

This will be a bit unpopular and controversial for most. Unlike a superhero role, where the goal is packing on muscle, the Bond physique is more nuanced.

Think more of Jason Statham vs the Rock in the Fast and the Furious franchise as a great comparison.

He’s a secret agent who slips unseen across enemy lines, executes a mission—nabbing sensitive data, then blows shit up whilst he sprints runs, and parkours off buildings/cranes/trains to escape.

To be able to do all that he needs, he needs to have serious cardiovascular capacity. And you don’t get that from doing a few HIIT workouts I tell you. James Bond will have put the hours into long-form cardio.

Considering he runs and sprints a lot, my guess would be lots of long-running sessions, I’m talking 1 – 2 hour’s worth of easy running to consistently build his aerobic capacity so that he can when he’s fit enough, he can handle the more challenging anaerobic work he’ll need to sprint after people and away from danger.

James Bond needs both aerobic and anaerobic work. Why? Because he needs to recover quickly to keep fighting more bad guys and have the mental clarity to think, do his weapon drills, and plot his escape. If you’re tired, blowing out your arse and sucking air, you won’t be able to do any of that stuff.

If you listen to Simon Waterson’s interviews about how he trained Craig, it involved a lot of running, sprints, and stair work. This is why! Also, as a side note, you’ve got to think about Daniel Craig’s workday—10 hours of sprinting, fighting, and car chases.

Craig would have been made to do the same physical scene multiple times. And he can’t seem winded. The 10th take should look like the first. You can’t do that without good cardio!

Not only is Craig’s Bond, ripped, but he’s also got muscle. There’s only one way to do that, and that’s to strength train. There’s no getting away from it.

After researching all the articles, I could find about the workouts Simon Waterson put Daniel Craig through, I found that many of them included both bodyweight and free weight exercises. They were often supersets with lower and upper body pairings or a full-body movement with abdominal work.

You always need a strong core to be athletic, James Bond is certainly athletic.

Something important to understand is Craig’s “Training Age”. He’s been training for a very long time, for over 15 years at least with Simon Waterson. That’s 15 years’ worth of training experience.

James Bond is explosive and dynamic, so he needs to do a ton of explosive work. Most people over thirty are not ready for that.

You need foundations of strength first.

So, assuming where you’re probably at in your strength journey right now, maybe a more appropriate routine would look like the following:

The list is endless here, however, focus on full-body movements and bodyweight movements that involve a lot of pushing and pulling. Why? Well, just think how many times James Bond must push people away and pull himself up. That’s why.

James Bond is explosive and dynamic, so he needs to do a ton of explosive work. Most people over thirty are not ready for that.Click To Tweet

James Bond can touch his toes. Let’s just start there. How many people do you know who can’t? If you haven’t got basic mobility and flexibility in place you’re not going to age well and you’re certainly going to be more injury-prone.

Let alone move as athletically as James Bond. I’d argue that most men over thirty need to stretch more than strength train as we age.

I can see it now, middle-aged men everywhere sprinting to catch a bad guy, then with an all-mighty twang, there goes a hamstring. I’ll catch you next time!

So, two very simple tests for you to try out:

If your answer is no to either, you need some more mobility and flexibility in your life. Areas to consider include; Ankles, hips, and thoracic spine which are often the biggest culprits of modern-day life, then think about how you can activate your abs (sit-ups won’t cut if FYI) and get your hamstring and abs working together.

Reports state that Waterson and Craig spent 30 to 40 minutes doing stretching and muscle activation specific to the sequences scheduled to film that day. Just think about that. If it’s good enough for them, it’s certainly good enough for you.

There was a piece in The Times newspaper written by Jonathan Dean, I’ll quote it word for word:

“Is this what he puts the 53-year-old Craig through to reach the chiseled middle-aged perfection displayed on the cover of GQ last year? Waterson cackles. “Nothing like this!” he says, as I pant and am told to lie on the floor, where I hold on to his ankles and stare at his crotch, wondering if I should have been an architect after all.”

You want to look like Bond, you need to put the hard work in. Preparation for No Time to Die took over a year, not including the previous 15 years Waterson and Craig had worked together.

You need to be determined, stubborn, and single-minded. One or two workouts just won’t cut it. Focus on nutrition, cardio, strength, and mobility.

Then, when you finally get the body you want, go join the special forces or MI6 so you can have his skills to go with it.

Article Name
How to Train Like Daniel Craig and James Bond
Description
Daniel Craig's James Bond is one of the most famous secret agents in all of fiction. And he has a rock-hard body to boot! But how did Daniel Craig get himself into such great shape? In this article, we'll help you train like 007 and make your dreams come true.
Author
James Breese
Publisher Name
Strength Matters
Publisher Logo

Everyday Athlete. Founder of @strengthmatters. Love 🏂 🏉 🏏 🏃‍♂️ ⛰ 🌊 I help people over 30 lose weight, get stronger and live better. Find me on www.jamesbreese.com